From a young age, psychic ability came to me as just a ‘matter of a fact’ type information. I never questioned if it was real, it just was. These abilities were discouraged until years later when, after trying to hold them down (like holding a beach ball under water) they powerfully and blatantly resurfaced.

Although I tried to quietly just be me, I was taunted in High School as being "TOO Spiritual” and it was given a negative connotation. I tried desperately to remain humble and devoted, and found a saying that I put on my bedroom wall that said, "No other talent exceeds that of Spirituality.” I decided then and there, that it was my path in life to gain spiritual wisdom, regardless of what the world thought.

Being in a religion which basically did not appreciate these types of gifts in women, I felt forced to hide them. What little I did share, I was looked at like I had 3 heads. I remember one Bishop who called me into his office.  He said, "Holly, I hear you have visions."  I thought, 'Oh no, here we go again.'  But was shocked when he asked me if I would teach him how he could have them too.  He learned rapidly from what was shared and within several weeks, called me up to share his first vision (of many). Although a rare moment, it taught me that I was here for a reason. 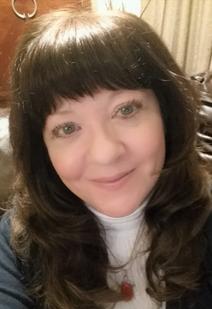 In 1999, I became severely ill with Fibromyalgia and Rheumatoid Arthritis, basically placing me bedridden. (I have since learned that the combination of these two diseases is the number 1 most painful of all the illnesses there is.) Not only did every muscle on my body throb 24 hours a day, but my joints swelled and I began to lose use of my hands, hips and shoulders and walked like a 90 year old woman. I spent months in bed, and didn't understand how this could happen to me. I was a mother raising 6 children, and went from being the caretaker, to the one literally being taken care of.  It was pure devestation in the beginning stages of wondering 'why?'.

During that time of great sadness and despair, a wonderful process was taking place. I began to understand that although my physical was being challenged, my spirit could forge ahead. Instead of helping others by taking in meals, and serving in physical ways, I could offer prayer and hope. I now see how this paved the way for me to open my abilities back up, and miracles began to occur on a regular basis with those who asked me to pray for them.  I knew something incredible was happening. The power of my mind and intention, coupled with love was making a profound difference in the lives of others.

Through these trials, I became aware of Reiki and studied it for several years before taking the plunge.  This process of becoming attuned blew the doors wide open on my psychic and mediumship abilities.  This became a huge problem for my religious beliefs.

One evening, a friend asked me if I wanted to have an angel card reading.  I was intrigued, and very curious, but nervous I might be playing with something I shouldn't.  (Angels...seriously?)  But with my religious training, interacting with angels wasn't exactly taught as something you just 'did'.  But this dear girlfriend gave me a reading that was so clear, so heartfelt, so accurate I went home and pondered it for hours.  I knew something was happening to me, and I couldn't deny it.  I decided I wanted to see an angel, and I wanted proof.  For the next week, as I knelt in prayer, I pleaded to see an angel.  I was so deeply sincere, almost as if I 'knew' it was going to happen.

Sure enough, one evening as I knelt to pray, I heard a voice say, "Look up."  I did and the most glorious being I had ever encountered was floating above me in the air.  She was so very large, and had wings that were massive.  She was beautiful beyond imagination and she spoke to me not in a voice, but clearly through the power of her mind.  She told me that my path was going to change drastically, and all that I had known would be left behind.  I felt such love and truth with every word she said, and there was no doubt in me that I would ever not follow her advice and counsel.  She spoke with me for what seemed like about 20 minutes on taking a new path Spiritually, and that it was what I had volunteered to come here to earth and do.  There was much more to the channeling, but you get the drift.

My life changed in that moment.  I awaited continued communication from her, and it came consistently and with challenges, in that my old mode of thinking had to be discarded for the newer truths she was teaching me.  More guides and angels came, more visions, and knowledge flowed into me. I was being taught by those not of this plane.  They taught me that the ladder of truth has many rungs to it, and many truths must be let go of, to reach the next level of higher perspective and love.  It was beautiful, but these new truths also had great repercussions upon the life I had built up to that point.

My religion and all the people I had loved and cared for, along with most of my own family members, did NOT understand, and felt they could not support me anymore.  I was judged and felt very estranged from them.  I was counseled to conform, or I wouldn't be allowed to interact with them anymore.  I was so distraught, as what I was doing was lovely, and pure and had such Christ energy in it, how could doing what I was doing be wrong?

I began to look for answers through books and websites. A few weeks after my ‘angel experience’ I remember I was sitting on my couch, and watched as a subway type vehicle drove across my living room and stopped in front of me. The doors flew open and I was inundated with spirits from the other side getting off the subway and wanting me to help them. The visual was mind boggling to say the least.

Luckily, I chose to stay true to this course of being taught.  Although quite lonely the first few years, with many unfortunate situations from my family coming up as opportunities for me to see what love looks like by seeing what love did NOT look like, eventually, all of my family except for my son, couldn't accept the new me. So my son and I set out on a path of our own.   I had this drive to experience what love looked like, and to test the truths of what I was being taught, and I understood how I was being treated was not of love. Sadly, it still looks like this to this day with my core family.  I keep my heart still open holding a place of love and forgiveness, hoping they will find a way to the path of unconditional love and acceptance...

At a certain point, all paths to my career choices began being difficult for me.  Spirit was showing me that it was time to begin my Spiritual Career.  There was a great many fears I had to overcome as I made this transition, but I'm so very thankful for staying true.  This has been the most grand adventure ever, and I stand grateful and in awe of such support.  I think there is a moment in your life when you move into your purpose here on earth. I would’ve never dreamed myself of being a medium/psychic/channel for anything in the world. It was not something I aspired to nor openly invited into my life. It was not something I learned from my family.  It was something I was called to do, an innate desire to find truth where truth exists. I was a reluctant medium/psychic for years staying in the closet, not wanting to accept it because of fear of not being accepted, being different. To accept it and embrace it meant an entire life change which affected my family, friends, religion and career choices. I knew that 95% of all my support group would leave me, and they did.  What I did not understand was that I was being lead to a community where I would be embraced by those seeking truth and love.  My abilities would be embraced, valued and appreciated.  Had I only known when I let go of that rung on the ladder, that more love, friendships and purpose would flow in abundantly to support and gather me into the arms of love. Granted it took awhile for that to come about as I redirected my time and energy on being love unconditional and on attracting those who also had the same desires.

Some of my favorite life lessons are:

“The three most powerful words I know, “Let it Go…”

"That which does not kill us makes us stronger"

My life has been full of challenges and trials of great magnitude. Each one of these experiences has reminded me of the highly intelligent, loving being I am, and I give honor to these opportunities for growth and expansion. In many ways, I am just your normal, everyday down to earth person, but these experiences as a channel are not normal by any means…given the extraordinary way they have of transforming people’s lives.

I love doing what I do and watching the changes of those whose lives have been enriched by these services. I believe with all my heart that people who are drawn here, know that we have a work of co-creation to achieve. My intention is that if you have landed on this website that you would come here feeling spirit directed. Dia and I are delightfully in your service...

In Divine Love, Holly and Dia